Black God: An Introduction to the World’s Religions and Their Black Gods

Black God: An Introduction to the World’s Religions and Their Black Gods

Have you ever heard that Christ was Black? What about the Buddha? They weren’t alone. Many of the world’s first deities and divinities, both male and female, were originally depicted as Black. That means dark skin, woolly hair, broad nose, and the kind of personality that made the world pay attention. In Black God: An Introduction to the World’s Religions and Their Black Gods, Supreme Understanding explores the many Black gods of the ancient world, from Africa to the Near East, to Europe, to India, to China, to Japan, to Australia, all the way to the Black Gods of the Americas. 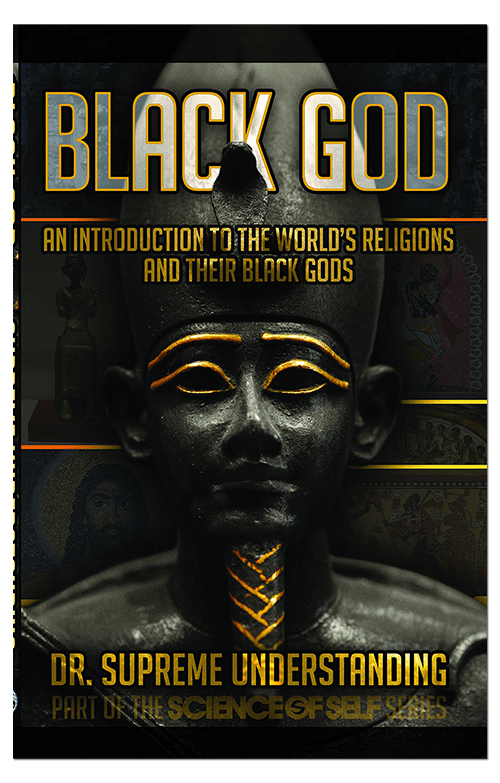 MORE ABOUT THIS TITLE

“The earliest gods and messiahs on all the continents were black. Research has yielded an impressive amount of material on the subject.” – Historian J.A. Rogers

Black God: An Introduction to the World’s Religions and Their Black Gods is a reference book. Unlike The Science of Self, Volume One, you don’t necessarily have to read this book from front to back. You can skip around, because Black God is meant to be encyclopedic – a useful reference on over dozens of deities, traditions, and other topics.

Throughout Black God, you’ll find dozens of quotes from books that are quite old. In many cases, we’re talking about more than a century old. In some cases, even older. Naturally, some of the language will be difficult and dry. Some of it might even sound racist.

So why quote all these old books? Because that’s when they were still telling the truth! Why? Because they believed we’d never read these books! In these old books (often the ones that didn’t circulate much) you’ll find white historians, theologians, anthropologists, and ethnographers making incredible admissions about race and religion, the likes of which you’re very unlikely to find in a mainstream publication today.